A fighting game made for 1 Class Jam

The graphics look good in general, but I don't get the rules. What does each letter do, why are the numbers for? :/

Yeah, it was made pretty quickly for a jam

Different attacks are better vs. different defenses. For example, a thrust will be completely blocked by a parry, will do 1x damage vs block and 2x damage against dodge.

It's a bit hard to teach without a long tutorial, but if I release it as a full game, I'll have to figure out a better way to teach the game instead of just dropping players in.

Oh, so it works kind of like a Rock Paper Scissors meets KH:CoM! Now I get it! :D
Maybe it'd be easier to tell how it works with a diagram like this one:

Definitely! Thanks for the suggestion, and yeah, definitely Rock Paper Scissors! <3 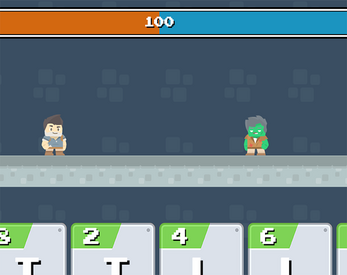